Here it is Sounds of Innocence,  my fourth solo album.
Sounds of Innocence is my inner voice, whispering constantly, sounds and melodies, textures and harmonies.
Life shouldn't feel like a limited state of being, but rather be an open horizon to explore and in which to experiment. Innocence is a place where one can surrender with tranquility. A place where everything is possible and nobody is superior over another. Composing is for me this natural state in which to let out all emotions, strengths and weaknesses. Learning  that the more we master our skills the more we realize how deep and wide we can go. A constant  intermittence  between  innocence and experience is brought to the surface of our awareness. Innocence is one of the most important substances to cherish in our hearts and lives. Innocence means expecting good things to happen or expecting the best from people. Innocence keeps one open to the world without the need of having to protect or hide oneself. Negative things may happen everywhere and anytime but innocence is still a choice one can make every day. Losing innocence results in cynicism, not trusting people, not trusting in life and  in the end not trusting yourself. Keeping  innocence fuels the feeling of being alive and enables evolving as a human being. Innocence is the essence and foundation for creativity and freedom. It  allows  openness to the simplest of ideas and access to one's innermost feelings and continuous flow of musical images. From this derives the ability to play, compose, improvise  constantly discovering the music inside me. All the reflective moments during the past year of my life are somehow represented in the ten songs from Sounds of Innocence. These compositions depict my experiences in perfect form. They combine my past to what I am now - remembering the innocent times of a distant past but simultaneously being humble enough to keep innocence as an important value at present. It keeps me learning, exploring, developing and sharing. I love what I do, and this involves a unique feeling that music is something that unites us universally. Music doesn't belong to me nor anyone. The more I create, the more innocent and free I feel to present and share my music.  Please enjoy my sounds.
1 Awakening Prelude
Classical guitar is my main companion when writing songs and for this reason it is very natural to have the Awakening Prelude as an opening track. It represents my everyday life. A peaceful intro to start the day off with the classical guitar. The melody, introduced in this Prelude, anticipates what will happen in the following song.

2 Gray Stone Gateway
During the period of the composition of Sounds of Innocence, I have been living in Finland. The landscape, the nature, the scenery of the capital city has been something completely new for me. A feature that really struck me in Helsinki are the gray stone buildings, walls and churches. I pursue the perfect combination of heavy guitars with a syncopated melody which expresses my identity as a Brazilian artist. It is present in all of my compositions and this song is no different. My passion for harmony, chords and complex progression  derives from listening to Brazilian music and It led me to jazz and the fusion which is also presented here. The Gray Stone Gateway welcomes the listener to the album with an intricate opening phrase. This song is a very direct, heavy tune where the main melody is totally based on the latin clave. The clave counterpoints with the heavy riff ,fast guitar phrasing and the fusion progression in the interlude. It is the dichotomy of the simple and complex, experience and innocence.

3 Conflicted
With the electric guitar in my hands, everything I play will have a touch of the 80's bands and guitar heroes. These were very significant in building my identity as a guitar player. Evidently I am proud to let this flow fluid and natural. The atmospheric intro creates an expectation to what is to happen. The attitude and energy is enormously intense in this song, delivered by the fast picking riffs and drumming as well as odd bars and broken grooves.  The conflict and the contradictory is musically represented with the interlude's calm, clean guitar passage preparing for the collision of heavy sounds and odd time signatures to follow.

4 Reflective
A peaceful, contemplative and reflective song to play.  Simple harmonies, innocent melodies and spaces. While composing and playing this song I am transposed to another dimension, experiencing the free fall,  the “no gravity”  feeling. It is the ultimate flow experience of losing awareness of space and time and simultaneously having this sense of being a part of something great and universal.

5 El Guajiro
'El Guajiro'  translates into the peasant, the country man, a name used in Cuba to describe the native people of the Caribbean.  Since my album Universo Inverso, I have increasingly been experimenting with the Cuban music. Cuba has many historical musical similarities with Brazil but the outcome has been surprisingly different.  In El Guajiro I let myself go totally latin without the heavy metal boundaries oppressing me. The percussion, claves and congas have a very important role in the arrangement of the song, which is uncommon in heavy tunes. Music is normally referred to as a representation of tension and release by the  harmony and melody.   Rhythmic patterns can serve this duty as well. Syncopations can create the momentum of anticipation and tension as well as release.  During the entire song the main focus is the groove and the superimposed rhythmic patterns.

6 Ray of Life
Ray of Life is a very introspective song, where the major key melodies and constant pulse absorb me into an indescribable sense of a heart full of life. With a bluesy touch and naïve melodies, this song has me looking at the bright side of life. Composing this song I found myself easily following the three given rules of a good writing process. Spontaneity, the greatest abbreviation of the passage from an idea to its written form; fluidity, uninterrupted writing; and, being open, unprejudiced, maintaining a quality of writing that does not know where it is going. The key turns to minor in the interlude, and together with the Brazilian samba called Partido Alto, brings along a melancholic moment. The final culmination in the end of the solo marks the transition back to happiness and enlightened feeling.

7 The Hymn
I believe this song is quite different from all the other songs I have written on my albums. I was never a big fan of grunge rock, but was always amazed by the interesting yet unpretentious harmonies. The intro as well as the chorus follow the concept of being loose, bluesy, organic and rough. To balance this, the rest of the song is very hectic and precise. I visualize it as the digital against analog, or the eletronic counterbalances rock

8 Mãe D'Água
Mãe D'Água means in portuguese the Mother of Water and it symbolizes the Amazon river mermaid. The  natives  call her Iara.  And according to the legend, she sings an irresistible melody that draws the men into the river and make them blind if they look at her. The melody of this song has been beautifully disturbing my mind for days and explains the choice of the song title.  Despite the fact that the legend of Iara comes from Amazon, the musical elements in the song are mixed. The berimbau, a very characteristic instrument from Brazil, starts the tune. The guitar  repeats  the notes and the same “toque” , an original African groove called the Ijexá.  All the percussion including the constant mantra-like berimbau patterns create the atmosphere of the song until the song reaches the main melody.  I kept my playing very minimal, not exceeding too many notes - even with many parts of the song having no guitar solos. These spaces create the sonic landscape. Picture the Amazon river with the mermaid Iara and on the other side the Brazilian berimbau and Afro-roots.

9 Twisted Horizon
This song was the first song composed for the album.  It was written during my initial moments in Finland as I realized I was on the other side of the world. Not only the horizon was upside down, but everything around me was so new. The melody of the song is very positive and headstrong, looking forward to a beautiful future. At the same time, over the major key melody, the bass and drums create a complex rhythmic pattern depicting a certain instability and uncertainty somewhere deep inside. By the time the chorus comes along, everything is back to steady and completely positive. I believe melodically this is the most uplifting song in the album. The melancholic mid section, à la Piazolla, reflects the melancholic side in the heart of every latin person (and Finn).

10 A Perfect Rhyme
The album was completed, all demos ready but I knew it would be very important to write a song that would represent the birth of my child and the realization of a family life.  I sat next to the piano with this thought in mind and the song flowed out in its whole entity. I kept the song exactly how it was initially created even though it could have made a nice intro for a heavy song or an idea for a beautiful singing ballad. However, this would have meant changing the original purpose of the song. A Perfect Rhyme - the guitar and piano are complimented with a nice orchestral arrangement to close the journey of the album. It's complete in itself. 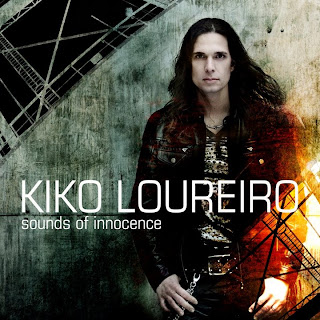 Every album is the result of hard work and commitment and is therefore a huge achievement. However, this album was one with more than usual significance and importance to me.   Sounds of Innocence  represents  Kiko nowadays, all my musical sides, wishes and desires.  Thanks a lot, always.