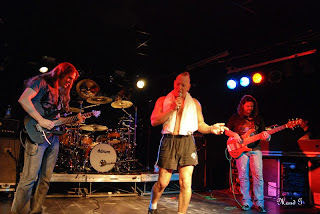 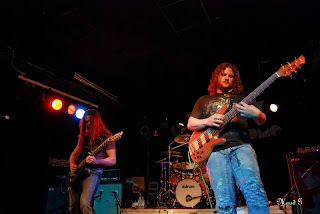 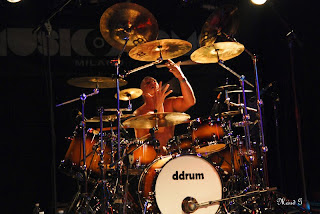 One more time back from Europe. Fifteen days on the old word appreciating its cultural and heathen riches ... These kind of trips are always a huge learning process, I have no doubts about it.

Immediately in the arrival , the big news which my connection flight had been cancelled due to the bad weather of the Channel Islands ( did anyone from Gol or TAM talked to Birtish airways?). Since I couldn’t cancel the guitar clinic in the London guitar institute they got me in another flight, which took me to other airport (Who cares?...). Since taxi drivers are the same in any hemisphere on earth as well as the scoundrles, the milord asked 300 reais for the ride and did that Paul Mc Cartney’s mouth smile... What can I do? At least I got there by the time.

After I went to Frankfurt to meet Felipe and so many brazilians who took part in the biggest music trade show as I told you before in the previous post.
Together with Mike Terrana and Felipe, We went to Milan by train. We were there so calm and speaking, talking in the restaurant waggon when an old mand asked where were we going to. While looking to the ticket the german prophesies that in five minutes the rain is going to tear a part and the reastaurant waggon would go to Viena and our wagoon with our equipment and suitcases would go to Milan. Detail: we were like 8 waggon away...we ran like crazy but we maed it. Detail 2: Mike forgot his jacket on the restaurant in this confusion, and this way he prooved to be able to do the whole way three times in five minutes. Nothing like a goal in life. We are always able to go beyond. This train trip still had its interesting moments. We got reviewed by the police in 3 situations... I believe our Brazilian visa and Mike’s Mohican worked as a good stimulus to the cups who want to show their job.

In the first day of Italy we went out for a rehearsal. Everything was happening in the best way until I find out that someone got in my Hotel room and stole my suitcase, with computer and other stuff... Doing the B.O. in italian in the first day of concert was prettily unforgettable.

As I told you before a Scoundrel is a Scoundrel be it in the german complex or in a hotel in Milan.

Excluding this didactic trip part off (Lesson one and 2 pretty much learned) the concerts were so cool.
Check out on youtube:
http://www.youtube.com/watch?v=--SUtxdLMgQ&feature=related
Great picutres in Maud.Taken by a french photographer.http://dimmaud.free.fr/Concerts/18-03-08%20Kiko%20Loureiro%20Trio%20%20Milan/
Interview in Marseille. I know french is a little weird...please, do not laugh about the way of the mouth...
http://www.youtube.com/watch?v=g15zsxSWHbY&eurl=http://www.guitareuroshop.com/catalog/blog.php