As usual, one more time Kiko Loureiro has his workshops sold out at expomusic which happens every year in São Paulo.You can see two pictures of Kiko playing on Warm Music booth. Hug (Webmaster). 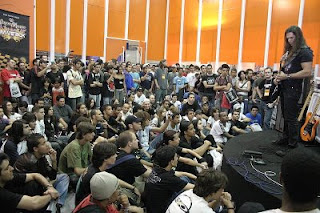 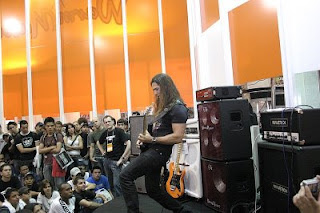 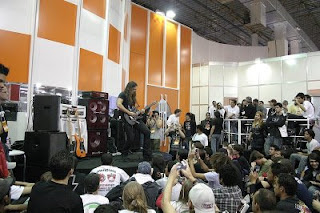 Posted by Kiko Loureiro at 05:49 No comments:

Kiko Loureiro won the respect all over the world 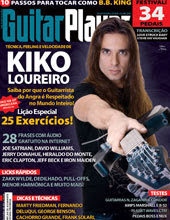 Cover for the october edition of brazillan Guitar Player, Kiko Loureiro has been recognized all over the world.Loureiro became famous as the guitartist for the heavy metal band named Angra and consolidated his sucess with his solo albums No Gravity and Universo Inverso, which explore the several influences of this musician, from rock to jazz, going through the brazilian music.
Kiko Loureiro’s talent was recognized by the american Guitar Player, which published on the issue of november an interview with the guitarist , showing the respect that Loureiro has been getting outside Brazil – a really great achievement, since it is very hard to get into the USA’s musical market.
The journalist , Matt Blackett, describes Universo Inverso like :’ Loureiro combines excellently intricate brazilian rhythms with rash melodic motives and great solos. Octaves in Wes Montgomery’s style exists with the lyrism in Jeff Beck’s style and pyrotechnics by Al Di Meola – everything with a dynamic tone”.
With his technical dominion of the instrument, opened minded person about music and full of talent to write songs, Loureiro is one of the biggest guitar players in Brazil.On its october edition, the brazilian Guitar Player published a great interview with Loureiro and special lesson about his style.The musician is going to be on the stand of the magazine at Expomusic for autograph session – 29th september (Saturday) on 04:00 P.M.; 30th september (Sunday), on 03:00 P.M. More information.
By: Webmaster
Posted by Kiko Loureiro at 05:28 No comments:

The Ten Commandments of Kiko Loureiro
1) Devotion e perseverance
2) Open your mind:To want to learn more; musical greed
3) To love music: to breath and to live music
4) To be methodic and to organize time to study
5) To study with the metronome in different settings
6) To study harmony.
7) To know at the least the basic of musical reading
8) To have a good vocabulary of techniques
9) Always to look for musicality
10) To play with different people and to be ready for different musical styles 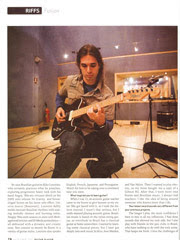 Technique, feeling and speed are some ingredients which made Kiko Loureiro to be admired in Brazil and out of Brazil, and he has been in a hurry for the last months. Angra celebrated 15 years of history with the album Aurora Consurges and went on tour.At the same time, Kiko Loureiro has done workshops and has published his second solo album.In some spare time Kiko Loureiro talked to Guitar Player.In the following lines, he talks about different times of his musical formation and give some precious tips for those who wants to improve their guitar playing.
Posted by Kiko Loureiro at 05:00 No comments: