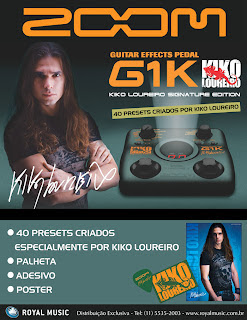 Zoom has just released the G1K Guitar Effects Pedal Signature Kiko Loureiro.The Simulator goes with 40 factory presets especially created by the Guitarist Kiko Loureiro.In the act of purchasing you still receive: a Pick, sticker and a poster Kiko Loureiro. More information on this link.
Posted by Kiko Loureiro at 07:56 6 comments:

Kiko’s Blog on the website of the Guitar Player/UOL magazine. 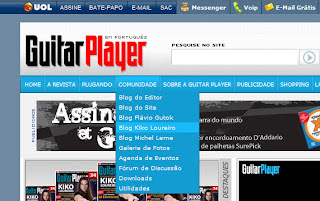 Posted by Kiko Loureiro at 07:52 No comments: 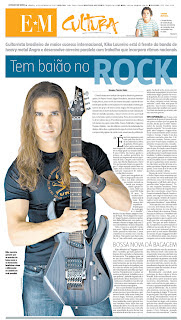 Brazil has never had the tradition of exporting rock guitar heroes.From Pepeu Gomes, Edgard Scandurra, Armando Macedo to Frejat paracá, were just a little of bit seen in the national scene.
The bet for this moment to end this marasmus is Kiko Loureiro who was born in Rio de Janeiro and is the guitarrist for the heavy metal band named Angra.

He has been reaching all the world with the band’s concerts and showing to the most different audiences his parallel work, the album Univero Inverso, which mixes Jazz, rock, baião, samba and latin music.The 30 workshops which he did in the last three months in countries such as Italy, France , Thailand , Singapore , Tunisia and Malaysia are a clue of his talent.The two last ones were an invitation from the brazillian embassies.
Besides that, the guitartis was cover on the Guitar Player magazine and had three pages in the american version for this publication.
Click here to download the .PDF file of the complete issue (830 kb – Portuguese).
By : (Webmaster)
Posted by Kiko Loureiro at 07:44 96 comments:

Presentation of Julio Viseu. The live show can be listened also through the interview on the website http://www.radiocorsario.com.br

By: (Webmaster)
Posted by Kiko Loureiro at 07:40 No comments: