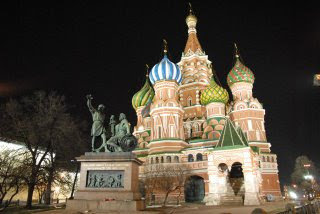 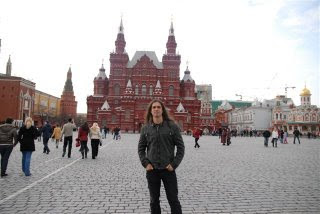 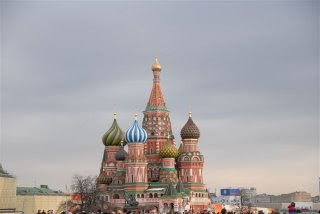 I have been off for so long...I know it.After these pictures in Portugal, the tour got into a sequence that was really difficult to write here.The tour went through lots of countries,shows and also clinics.
Today I am going to Tunísia and I am taking this little time here in the airport to post some pictures of Angra’s tour.
One of the coolest moments of the trip was our visit to Moscow.I have always been fascinated by the social and political history of this country, it doesn’t matter being Russia or URSS.When we got in Moscow, we went for some dinner and after we went to bed.As we had few free moments in this city,I didn’t want to waste time and I went on foot to the famous “Red square”.In a –10º degrees (Celsius) cold weather , I could take lots of pictures in a desert place only with me and a police car which protects the mausoleum of Lenin 24/7.We were the only people walking through the square at 4:00 am in that cold weather which no Brazilian can imagine.
Russians were always telling me how dangerous it could be walking on the streets at that time.I wondered what could be more dangerous than living in São Paulo?So I decided to go on,totally relaxed...The problem was that in Russia anyone can be a taxi driver.It means, if you see someome walking on the street, you can stop and ask if this person doesn’t want to get in the car and pay for the ride.You don’t have to have a license off.So, I was walking on those cold streets, and every five minutes an old car stopped (do you remember those Ladas car?) with a guy speaking something(sorry, but it was only possible to learn “yes” or “no” in russian).I’ve got to admit that I got a bit apprehensive,but after he spoke something in Russian, I answered in Portuguese (English doesn’t work there).It worked!The guy walked away.
This coloured cathedral is very beatiful, isn't it?Well,the legend says that the Czar who was the responsible for that,thought the same.Then he decided to get the architect blind to avoid that he would build another one to another Czar or powerful/rich people in that time.
Kisses and Hugs!
Posted by Kiko Loureiro at 07:59 No comments: