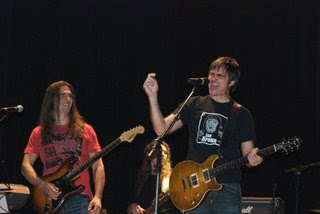 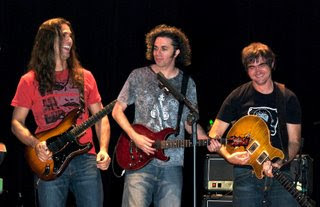 Getting out a little from my virtual traveller guide’s histories I am gonna tell a little about the event which happened on last tuesday june 19th at Mix Auditorium.
An encounter of guitarists with different backgrounds and styles to homage songs which became history via this dearappendix of wood with 6 strings (XL 0,10 by preference...).
A Nice Idea developed by the marketing of D’addario/ Musical-Express , which let the viewers from its website to vote for the most significant songs and from this we got the “set list” of the night which would be played by the endorsses of the company,Samuel Rosa,Michel Leme and the inttermitent blogger that writes for you.
It was a Nice surprise to see Michel playing rock, because who knows about him also know that he is the headbangermost jazzy who exists.His Gibson 175 is only appearance...Enviable the instrumental version of Living Colour, who didn’t go missed it.
To get to know Samuel and to play with him was also a gift. He sang, played solos and some improvisation and he showed himself as a big expert in rock/blues when he start playing some songs for the final jam.
For me the funniest moment was to see the surprise in the eyes of the audience when I started singing Smells Like Teen Spirit by Nirvana.After all this is the most representative song from the 90’s.Who can deny that this song made ridiculous all the guitar-heroes and virtuosos of feather broom hair and cowboy boots from the end of the 80’s.After Kurt, the messiah of the out of tuned Jaguar, just Vai and Satriani stayed on the stardom... not even him stayed...
Who wants to check out :
http://www.youtube.com/watch?v=B-JFWtbboYE&mode=related&search
Something needs to be clear here: I have never been a Nirvana fan and even tried to unlearn how to play the guitar with the precussor of emos, but the joke was cool!
Some pictures for those who missed the event!
hugs
Kiko Loureiro
Posted by Kiko Loureiro at 07:35 No comments: 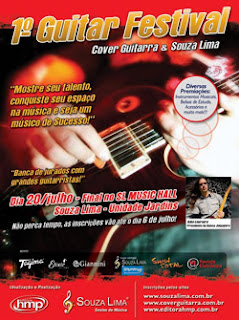 After the text about the south america tour, I will keep telling little by little about my past trips... 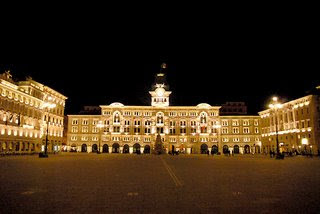 After Slovenia I went by car to Triste which is placed on the northeast of Italy.I went there to play in one of the principal music schools of the country.I took this picture from my routine walks into the dawn...after all is the only time that I can get to know more about the places where I go.

On the next day I woke up early and I went as a sleepwalker zombie to take the train to Milan.There would be a Tv program, “Rock TV”, where I would publish Universo Inverso which has been recently released in Europe.

I arrived on the studio trying to speak a little of italian just kidding....speaking with the accent which I learned in Mooca and Bexiga(São Paulo’s regions).Then the director of the show comes and speak: Che belo! Parla Italiano perfeto! Poi fare il programa solo! Going straight to the point...the guy came and told me that I should announce the show which was live during one hour in open channel to the whole Italy.I would have to announce clips ,to play live the songs from the Universo,to talk about the cd and to comment the clips and if it wasn’t enough, I would have to go to a lap top to answer some sms that the public sends live.A progam like MTV, but the guys didn’t have a VJ!!Totally trap! If it were in portuguese it already would be difficult.Some minutes before entering on air I conviced the guy from my record label, Pat Scalabrino, at least to be on the lap top and to read the sms and to help me a little with my risible italian that I have never studied in my life...I have this video locked in seven keys at home with the recording of this show...

...Obviously I don’t have pictures of this “tragicomic” moment of my life...even because the last thing I could think was to take pictures, or to remember that I had a camera in my rucksack in the middle of all this “cassino”...
Posted by Kiko Loureiro at 04:48 No comments: