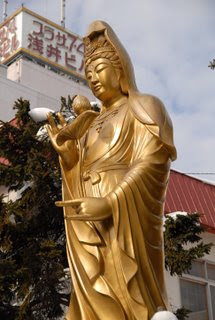 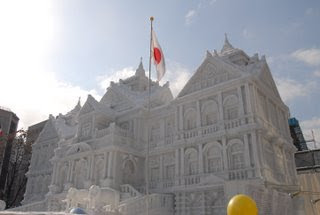 We are already here in Europe, but I still want to show some pictures from Japan trip.
Before the final concerts in Tokyo, we went to Sapporo.There we could see a contest of ice castles and I also have found this metal god in a japanese temple.I got scared with this image.Soon I gonna write more...huges!
Posted by Kiko Loureiro at 09:59 No comments: 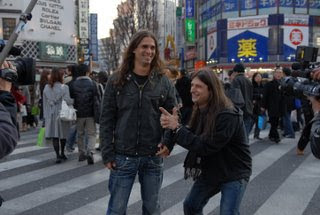 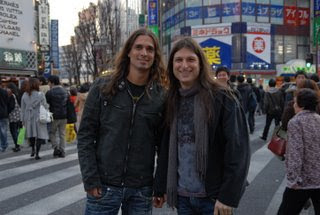 On the last day in Tokyo we took a walk around Shibuya, or for those who remember of the japanese class from the other post, we went at “Ku” in Shibuya.I and Rafa got out to film for the IPC channel, a kind of “Globo in Japan”.On the picutre Rafa is showing the basic position of “Kantcho”.I can’t explain now what it’s exactly this japanese way of entertainment.
Some minutes before it I could apply “Kantcho” on Rafa in front of the cameras!It is something to be written trought the times!
The last picture is the view from the place where we played during the soundcheck. It is reallty beatiful place, isn’t it? Huges and kisses.
Posted by Kiko Loureiro at 09:54 No comments: 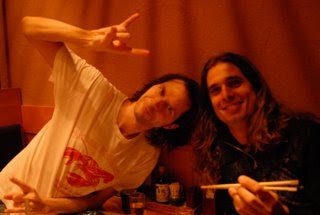 Today we played a concert in Hiroshima.In the morning I went to the “bomb museum”.Sad and impressive.The guys went there yesterday,but I had a clinic to do at Hiroshima’s MI-GIT , I had to go alone today before going to the concert house.
Yesterday after the work I went to a restaurant with the illustrious company of Paul Gilbert. I learned so much listening to Racer X and Mr.big, and it was a honour to be with him and to spend the night talking about music, career, trip histories etc etc...
The restaurant was specialized in Fugu (Remember to pronounce “fu” as you were blowing something). It was a desire of Paul Gilbert, who insist on to eat Fugu. At the restaurant I found out that Fugu is our famous Baiacu. Many people is afraid to eat this,because it’s poisonous.If the restaurant is not reliable you get out straight to the hospital.I think this restaurant was only of baiacu.I was present to the biggest gastronomic orgy about the poor baiacus.I ate sashimi,fried baiacu,cooked on the bubbling water of pan which everyone puts the little wood used to eat japanese food (hachi!).Until the sack came along with baiacu fin.Sack flavour fish!The only thing missing here was a dessert of baiacu ice cream...but we asked for a candy of green tea.
Here in Japan is like this.The culinary variants are : fish, miojo , rice and green tea.
There’s no way to escape from these four things.
Attached my picture with Paul with his 1,94 centimeters of height in the restaurant otsukarechan! Kiko Rurero san saying goodbye for tomorrow to go to the seven degrees below zero of Sapporo.
Posted by Kiko Loureiro at 10:01 No comments: 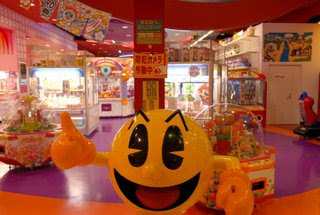 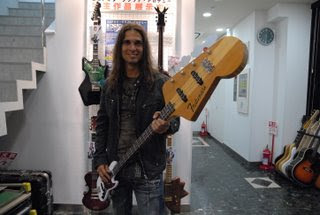 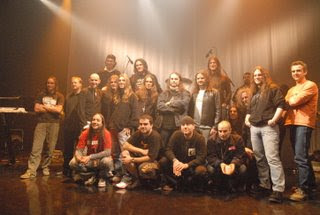 Ohaioo gozaimatsu!Ogenki desu ka? Kakui des!
I am just stopping by to say “hello” to you guys from Japan!
Today here in Nagoya we took a picture with the whole people on the tour.Angra, Blind Guardian and the two crews.
The “problem” with the guardians is that they have too many bald guys... On the picture is missing one and the bass player is wearing a cap.There are actually 4 bald guys... On the first days we used to get confuse to recognize who is who...It’s enough the audience who is always full of similar persons.Notice that aside Aquiles there is a guy who looks like Harry Potter in his fourties and Havengar wanting to show aside Marquinhos.The first person is Peter who has already worked with us on Rebirth European tour,the other person is Blind Guardian’s Technical crew , he has a lot of experience due to work with Saxon since the 80’s.
I don’t have to tell you guys a lot, because Angra’s site is really well-updated with photos and news from the tour.
Kisses and Huges with japanese eyes!
Posted by Kiko Loureiro at 10:06 No comments: