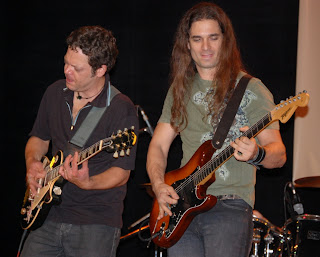 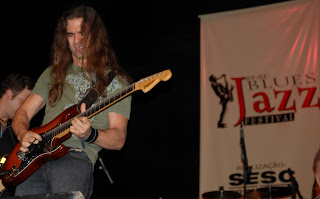 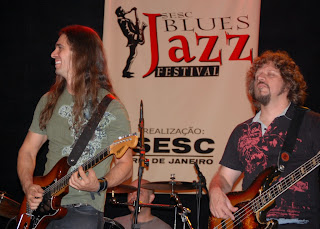 Last Saturday I had the pleasure of performing with my friends from the group “Irmandade do Blues” Edu Gomes, Silvio Alemão, Vasco and Ulisses. (Something like Blues Brootherhood)

Some pictures for those who couldn’t attend to the event.

Posted by Kiko Loureiro at 17:55 No comments:

As I promised I am going to post all the texts which were published on Guitar Player magazine , here comes the first one published on August:

Getting ready for the south america tour

As every single tour, the hard work starts pretty much before the trip itself. I got in the band in the middle of the worldwide tour and the band had already played and rehearsaled several times. I had just one rehearsal before the first concert and it was a big responsibility. Therefore, my getting process had to be minute, precise and solitary.

First of all, comes the musical part: get to know all the songs deep down. It takes to play the whole concerts, on the set list sequence, without making mistakes – playing everything in the minimum details, after all, rock bands don’t accept scores on the stage!

One tip: In case you go through a similar situation, the great thing is , first of all just to listen to the songs. Burn a CD with the themes in the sequence of the concerts and listen to this as it was your favourtie album, inside the house, in the car , Ipod... Picture yourself playing the harmonies, the pickings and the song structures. Sing the melodic parts of the solos. Thus, when you play it on the guitar, it would be much easier, 70% of the process done.

After, without leaving the musical part behing, it’s time to check the equipments. A good professional has to have a gear in perfect conditions under the musical style. After all, during a tour, everything can happen. You will be going through a sequence of concerts and you will be in other country, away from home, from your luthier and your confidence store. It’s good to have everything check out, and by preference with spare gear. For example, any kind of guitar used, take a spare one. Take some spare tunning keys, keys, bridges and new and good cables, besides spare parts! You have to take enough strings to change each two concerts.

In the particular case of this tour, the songs took a guitar tuned in A 440 and other one a whole step down, a seven strings and a nylon strings acoustic guitar. I travelled with six guitars and an acoustic guitar, all of them had been checked up and adjusted for all these different tunning. Since the songs feature more riffs than solos, I decided to use D’addario .011 on the A 440 tuned guitar and .012 on the whole step down tunned.

It seems complicated, but this precaucations are fundamental to feel relaxed on the stage and to avoid problems during the concert.

And don’t forget about the matters of getting tickets , dates , visas , documents and etc!

Posted by Kiko Loureiro at 16:17 No comments:

Never is too much to talk about art and to learn from each one’s point of view.
The concept developed during the history by the painters influenced music, literature, movies, design, advertisement and etc.
For those who don’t know , notice how different a painter can conceive the idea of portraits.

I posted a Caravaggio, Modigliani,Portinari, Basquiat and Anita Malfatti.

Just to let you guys know the news.


Rock House, the leader in music instruction, announced today that Brazilian guitar virtuoso Kiko Loureiro is the latest musicians to join Rock House’s roster of master instructors. Kiko is the driving force behind the band Angra who has sold millions of CDs and toured the world several times over. Kiko is often voted by magazines and fans as one of the most talented guitar players worldwide. Young Guitar Magazine quotes “His guitar playing is top notch and can be compared to the masters like Vai, Satch and Petrucci. Kiko is a versatile guitar player with a deep knowledge of Rock 'n' Roll, Heavy Metal and Jazz which you can hear in his solos, riffs and melodies. He is also known for infusing traditional Latin rhythms into his playing. Production is slated to begin at the end of January 2009, no release dates have been set.


There will be at least two instructional DVDs where students will gain an understanding of his musical foundation and how his global musical vision can help expand their own guitar playing. Topics will include his approach to building melodies, his use of arpeggios, his unique tapping techniques, Jazz harmonies and much more. “Kiko is one of the most complete musicians we have every signed, on his 2005 solo record No Gravity he not only plays guitar he also handles percussion, keyboards, piano, bass and acoustic guitars on the album.” States Joe Palombo, Executive director of Rock House.


Kiko’s instructional products will be available at MI retailers around the world for $24.99. Stay tuned at www.RockHouseMethod.com, and www.kikoloureiro.com.br for information on release dates. All Rock House instructional products are distributed through Music Sales Corp. 1-800-431-7187; or call Gordon at 1-866-You-Rock.


Each on of Kiko’s DVDs will come with a FREE tab lesson booklet, iPod ready video and membership to Rock House’s lesson support site at www.RockHouseMethod.com. This feature, exclusive to Rock House and its partners offers students supplementary support for the lessons featured on the DVDs. Rock House has developed an accelerated yet easy-to-use system of learning that utilizes the functionality of DVD and Print, integrated with the accessibility of the Internet. Aspiring musicians who have a product produced by Rock House receive free membership to www.rockhousemethod.com for 24-7 lesson support. Students use this fully interactive site along with their product to enhance their learning experience, expand their knowledge, link with instructors, and connect with a community of people around the world who are learning to play music using The Rock House Method®.

For more information contact: Joe Palombo at jp@rockhousemethod.com
Posted by Kiko Loureiro at 11:21 No comments: 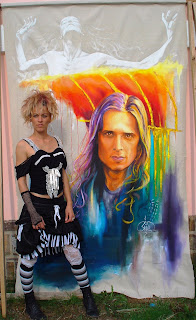 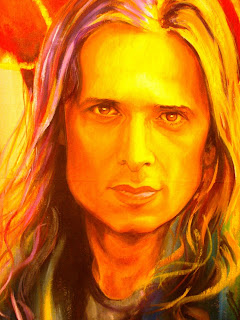 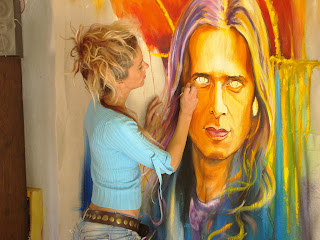 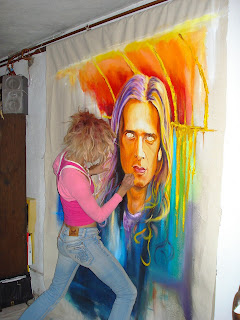 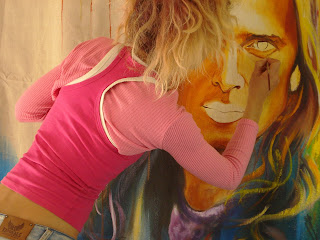 For those who know the picture from the left size of my Myspace, will find familiar this face on the painting.

I hope you enjoy the french synesthesia 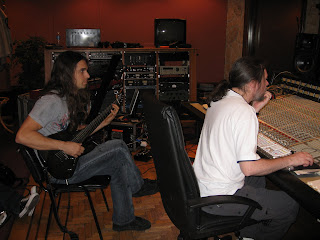 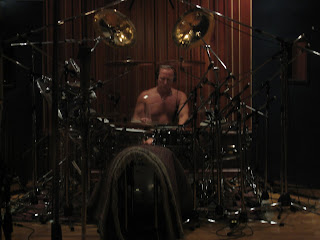 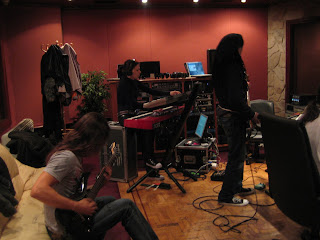 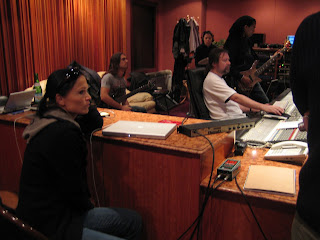 For those who don’t know, “Kiko’s Blog” has also been published on the Guitar Player magazine. I will post the texts here too!

On the pictures we can see all the band’s members. Mike Terrana-drums, Doug Wimbish-bass, Maria Ilmoniemi-keyboards,, Tarja and me.

After a month time tour, nothing stranger than being at the hermetic environment of a studio, moreover together with “boludos” argentineans.

Studio and Stage: two completelly different words. There are musicians who are focused on only one of these words, but we have to be ready to learn how to survive in these two too hard environments.

In my opinion, studio is worse than stage. It shows all your mistakes and weaks like a micro­scopic magnifying glass. Everything sounds, everything is heard, there’re sound from outside, no applauses, signs of satisfactions, hisses or something to guide you.

You just hear : “Next Part”/ “Next electric guitar”, which means “It’s enough to the producer to work”; or “ Do your best now”, which means your attempt was failed. This euphemism “pseudo-encouraging” helps you, because you always believe that you can do something better. But after we learn the first “take” is the most authentic ever. Rule # 1 never delete the first take, you will probably regret it.

After the Buenos Aires concert with Tarja, we went to the studio at argentina’s capital to record a new song from an upcoming single of hers.

We have played this songs throught out the tour, so everyone knew their parts and what to record. We had only 12 hours to record it, to set it up and get the best tone of our instruments, extremely short time for a cool production, but there was no choice.


In this age of magic and perfectionist computers, it’s seldom to Record live in a studio with the whole band, but due to the matter of time that what we did.

An interesting fact is about looking at these two worlds, classical-popular, confronting each other. While the americans ( From a very empiric education) give more importance to the song and the mood that everyone is going to create, the classical musician focus on the perfect playing,. It was funny to see the discussion about what conducts time, the drummer or the metronome? The drummer follows the metronome, but in case he plays “in front” or “laid back” it, who will we follow?

We followed Terrana, after all it’s much more musical, of course.

When the drums, bass, keyboards and electric guitar were done, we chose a good “take”

And the drudgery starts. Guitar recorded in more than one channel!!! Modern productions and mainly rock ones require what we call “ Guitar walls”.

Incessant channels to get the ideal tone. I recorded four times with an amplifier and more four times with other amplifiers, using different electric guitars too. The interesting is always about trying to alternate from a heavier amplifier, less middles, more distortion and less attack, which are characteristics from the american amplifiers and more moderns, with a nas al tone, straight to the point and with attack which we find in the traditional amplifiers. In case you have just one amplifiers, you can find this difference changing the controls of it. Other idea is to record a sound almost clean, crunch, to get attack and definition. Alternate electric guitars with different pickups and styles is also essential. On this record I used a K 1 seven strings ( No floyd rose at all) and a Tagima Les Paul.


When we start having uncountable channels like in this case, the playing has to be repeated in the minimum details. This way is better to record each part ( 16 metters, for example) and to record it again in the sequence. When you play the entire song and after you record the other channel, it turns out to be very complicated to memorize and probably difficulty to get the effect you want.

After the electric guitars, time for the nylon acoustic guitar. An interlude barroque , a duet with a cello. I decided to record three channels by my own, two of them I recorded the same thing and at the third one I added a “higher” note. It’s a good opition to create a good sonority on the acoustic guitar, mainly for us , electric guitar players, who don’t have that skill with the right hand. Despite of the difficulty of recording more than one time sounding pretty the same , you get it all in tone.

After these uncountable hours being vexed by the “grid” of this infernal binary system, we went out to have some deserved “chorizo” and have some fun with the argetineans.